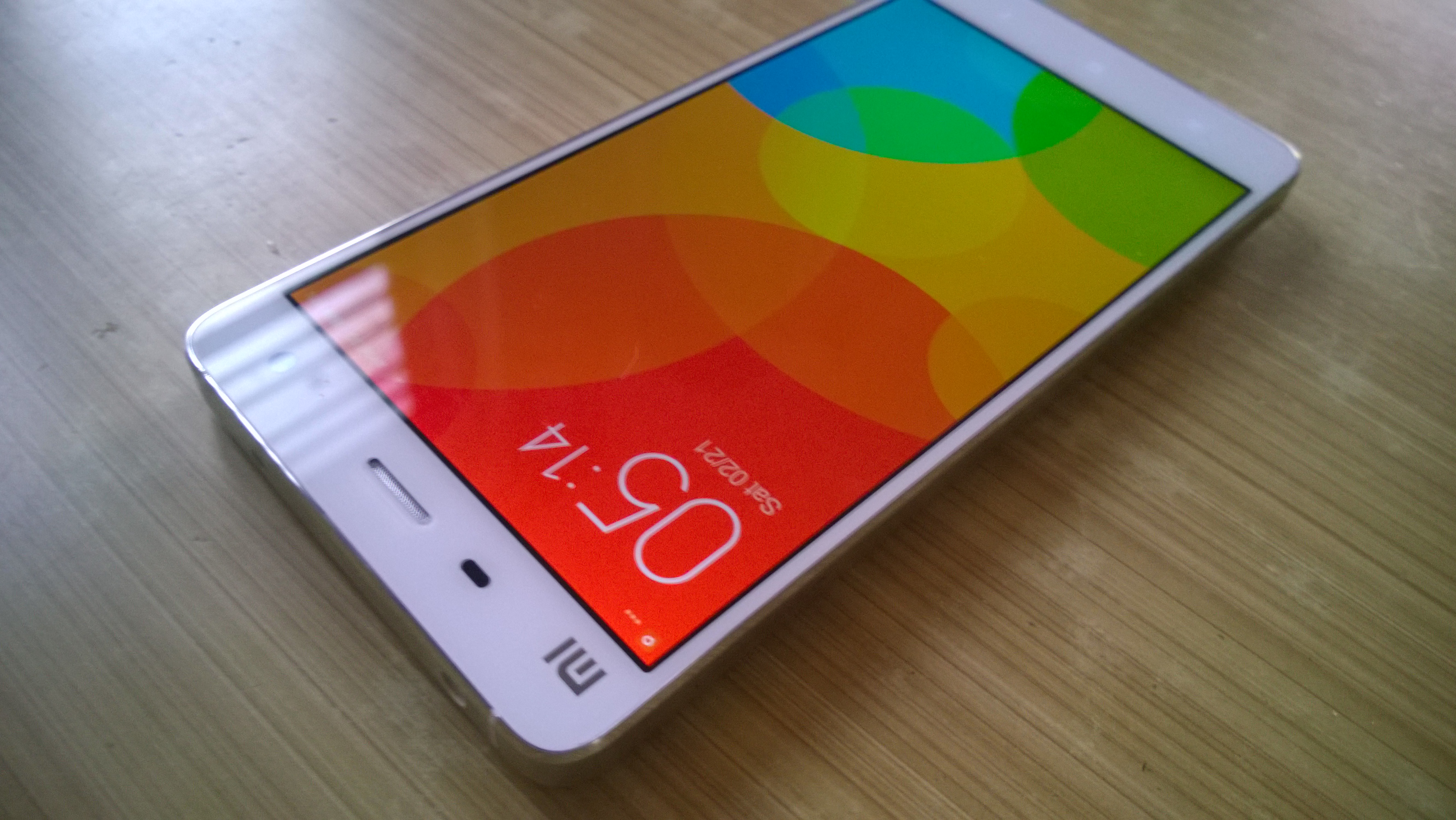 Mi4 is the new flagship from Xiaomi, successor to Mi3 which was released last year. Mi3 was released with great specs for a low price. Let us see how Mi4 carries it forward.

The hardware specifications are top of the line:

The phone looks good, although it looks very familiar to iPhone from a distance. The dimensions are 139.2 x 68.5 x 8.9 mm. It is not thick or thin at 8.9mm and feels solid to hold in a hand. The sides made of stainless steel, curvy at the edges and the back panel make it easy for the user to grip the phone and it feels like you are holding a premium metallic flagship. At 149 grams, it feels good on the hand. The phone is quite easy to operate in one hand since the screen size is not more than 5 inches.

The buttons go on the right side with volume rocker on the top followed by the power/lock-screen button. In the left side of the device, you can find the micro-SIM slot which is to be opened using a needle-like opener. 3.5 mm audio jack and the IR sensor are on the top of the phone. There is a micro USB slot for connecting and charging at the bottom portion to the left side and the speaker grill towards the right. Below the screen, you can find the 3 capacitive touch buttons for settings, home and back.

The 5” IPS LCD screen with a Full HD resolution (1920 X 1080) produces a great 441 ppi display with colours that are crisp, which is a treat to look at. Outdoor visibility is good. You can actually use the phone for even watching movies in direct sunlight. And this screen is protected by Corning OGS glass, which means it can take quite a lot of punch.

The Interface is the same MIUI, which has been used in earlier Xiaomi’s phones and is Xiaomi’s customization of Android UI. It is pretty simple and straight forward, although they look lot similar to iOS icons and design. There is no separate App drawer here. Instead, you can add many home screens like in iOS. All the installed apps occupy places on the home screens. You can also group them similar to how it’s done in iOS. The interface responds smoothly, there was hardly any delay when navigating within the OS and the apps. Mi4 comes with Android 4.4 (KitKat) on-board, though you can expect an upgrade to Lollipop.

The built in video player pretty much played anything we threw at it from .avi, .mp4 to .mkv files. It also supports 4K video playback. All the videos played without any issues. Also, if you don’t like the default video player in any case, you can always download VLC, MX player etc. from the Play Store which are available for free and support a wide range of file formats and resolutions.

Mi4 supports EDGE and 3G data connection speeds. Wi-Fi (dual band) support is also there is Bluetooth for data transfer, it can also act as your personal Wi-Fi hotspot with the internet sharing feature, allowing you to tether other devices. Wi-Fi is also useful for sharing via DLNA.

Mi4 comes with a 13 MP main camera. It takes some good shots in daylight. Lowlight performance is quite good too. There is also a LED flash, which is quite good for snapping a picture in a medium sized room in total darkness. It is not powerful flash though. It won’t illuminate objects satisfactorily at a distance of more than 10 feet. Macro shots are particularly good in daylight.

Video recording allows for capturing in 4K, 2K & 1080p resolutions. The level of detailing is good. 2 mics provided for directional audio recording do a great job at capturing the surrounding sounds properly. But the positioning of 2 mics in the bottom & top parts, makes you to be bit careful not to block the mics by placing you hand in front of them inadvertently. Overall, the camera performs well.

The 8 MP front secondary camera is very good at taking selfies in wide angles and great for skype/video calls, etc. and also allows for 720p video recording. Here are some sample pictures.

Mi4 packs in a 3080 mAh battery, which easily lasts for 2 days on moderate usage, which is really great for a smartphone. With heavy usage it will easily sail through a day. There is also an ultra-power saver mode which limits number of background apps to save the power, which will extend the battery life by few more hours. Battery life is quite good for a flagship.

Xiaomi Mi4 has been launched for Rs 20000. It’s a great phone with great multimedia performance. The design is great with stainless steel and all. Is it a great upgrade over Mi3? The CPU, front camera, RAM has been upgraded, also the design is premium. It would have been a great value for money if it had micro-SD support or 4G-LTE support which it lacks. And also 16 GB is pretty less space for these days. You could rather wait for the 64 GB version. All things said, it does offer 4K recording/playback and great performance at this price point.