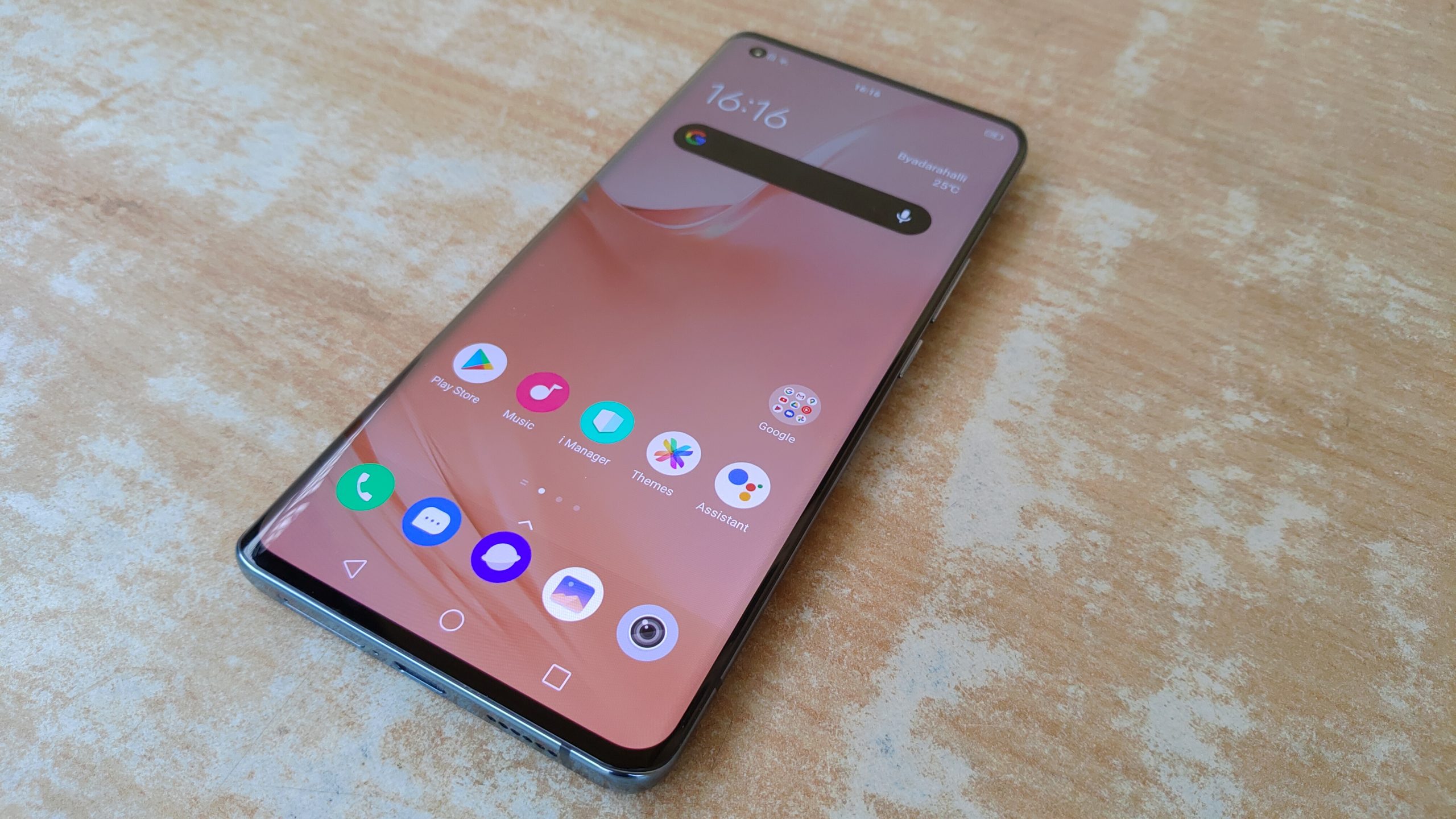 Vivo has launched their new X50 series which is more emphasizing on the camera/photography side of things. While the CPU is not flagship level, we will see how it performs.

The device looks modern and feels great to hold. The measurements stand at 158 X 73 X 8.0 (in mm). The phone is quite big, and the entire screen would not be reachable in one hand for people who do not have large hands. The aspect ratio is 19.8:9, which makes the phone long and is quite difficult operating with one hand for people that do not have large hands. Since it has Super AMOLED display, the visibility is excellent even in direct sunlight, with ample brightness.

On the bottom side of the phone, we have a mic and the USB C-type connector to the middle. On the left side of the bottom portion, you have the SIM tray, where you can insert 2 nano SIM cards.  Power and the volume buttons are in the right side towards the top from midway. The top side has a solitary mic which would be used while recording audio for the videos.

It comes with Android 10, with Funtouch OS on top. Vivo has improved their OS UI a lot compared to earlier versions of Funtouch OS and looks more in-line with the modern Android skins. (Earlier it was like iOS with bunch of settings you had to slide from the bottom). Still it is pretty far from the stock Android UI. There are some bloatwares which you cannot do anything about. You still get some bundled apps like sound recorder and FM Radio, which is not much as to irritate. Overall, this is a better Android experience from Vivo. The In-screen fingerprint sensor is fast and unlocks the phone quickly.

There is a specific gaming mode, where the device detects games and automatically disables the alerts, frees up memory etc, to have an interruption free gaming session. You can also cast it live or record the screen. This is a nice feature for gamers to have. Since this device uses Snapdragon 765, it is not that far behind the flagship chipsets (According to some benchmarks, it is just behind Snapdragon 855, last year’s flagship hardware)

Watching videos in this phone is a great experience, owing to the wide aspect ratio of the phone. The display is crisp and makes it for a great watch. It can play 4K videos without any hassles due to the processor used. Audio quality is good, and you would enjoy listening to your music. There are some audio settings which you can tweak around in the settings once you have connected your earphones. The device does not come with a headphone jack. But there is an adapter for that and does the job. Hence, no headphones can be used when the charging the device, unless you use wireless headphones/earphones for the purpose. Vivo has also bundled a nice sounding earphone along with the device.

Vivo X50 Pro supports the usual EDGE, 3G or 4G (with VoLTE). Wi-Fi (dual band) support is also there, and so is Bluetooth 5.1 for data transfer, it can also act as your personal Wi-Fi hotspot with the internet sharing feature, allowing you to tether other devices. Wi-Fi is also useful for sharing via DLNA. It also comes with dual VoLTE support. For location services, the device supports GPS, GLONASS, etc. Also, for data transfers, the device has a USB C-type connector. Weirdly, NFC is not there.

Vivo X50 Pro comes with 4 cameras at the back. 48 MP main camera, a 13 MP portrait optical zoom lens, 8 MP ultra-wide lens and an 8 MP macro lens. There are few modes like Portrait, Auto, Night and HDR which is self-explanatory. There is also a Pro mode where in you can control all the settings manually, like shutter speed, ISO, white balance, exposure and gives an option to manually control the focus of the main camera. The camera does have a very good  OIS and stabilizes very well, owing to what Vivo calls as Gimbal stabilization for the main lens.

The camera takes great photos. The portrait mode works well, and you get good looking photos here. It also allows you to shoot and store the photos in RAW format which allows more control for post-processing later. The 32MP front camera takes good selfies. Overall, it takes great photos and is up there in terms of “flagship” camera performance. It takes really good pictures at night. The dedicated Macro lens allows to take some amazing macro shots at very close distances. So, the number of cameras in this device will have you covered for all types of photography that you can think of doing with a phone. There is also a dedicated mode for astrophotography to capture the night sky and a supermoon mode which can be used to capture the moon. And we were very impressed with both these modes for what it could do on a phone. This is truly made for photographers and videographers.

Video recording allows for capturing in 4K, 1080p & 720p resolutions, and stabilization (achieved by mounting the main lens on a ball kind of setup, which Vivo calls as Gimbal) is one of the best available in any phone. It also allows slow motion video capture, 1080P at 120 FPS and 720P up to 240 FPS. Here are some camera samples for you to see.

Vivo X50 Pro has a 4315 mAh capacity battery, which last around one and a half day on moderate usage. With heavy usage it will still make it through a day. There is a power saving mode which will limit the background app activities, disables email auto-sync and reduces visual effects. Also, there is a 33W fast charger provided with the phone which charges the phone faster. All in all, battery management is good in this device.

Vivo X50 Pro has been launched at ₹ 49,990 (8 GB RAM, 256 GB Storage). At this price, it gives good value in terms of design, camera and performance. And at this price, there is nothing quite like this purely in terms of camera features and performance. This phone seems to have been designed specifically for photographers and amateur videographers, and it does not disappoint in those aspects at all. This device would be very good for taking photos, recording videos and social media usage. This is a flagship device, even if it does not come with top of the line processor. If camera is not your main criteria for your phone, then there are a lot of better overall performers in terms of software and hardware (better processor, dust and water resistance, etc) in this price range.