Samsung has had phablets for a while now. They revealed Galaxy Note 4, the flagship of 4th iteration phablets at IFA, Berlin in September. Now they are available at stores and online retailers in India as of now. Coming with a plethora of features, and being a flagship, the expectations are very high from this device. Let’s see how it holds up to them.

Being a flagship, Note 4 comes with all the bells and whistles:

The device looks and feels great. Samsung has started giving some attention towards the design of high end devices of late and it shows. It has metal frame on the sides, with high quality plastic & glass in between those frames. The back panel has a leather like finish, which makes it easy to grip the device. The dimensions for Note 4 reads at 153.5 x 78.6 x 8.5 mm. It is relatively slim at 8.5 mm and weighs 176g, which makes it feel bit light for its size. People with small hands may find it uncomfortable to hold it in one hand.

The power/lock screen button goes on the right side with volume rocker on the top section of left side similar to most of the Samsung devices. The top of the device consists of 3.5 mm audio jack and a mic at the left and IR LED, S-Pen slot on the right. The bottom part contains micro-USB connector at the middle with mics at either side. The top of the front panel includes ambient & proximity sensors along with the front camera.

The backside of the device consists of the main camera at the middle halfway towards the middle to top portion, beside which we have the LED flash unit. The camera has a slight bump to it, but doesn’t stand out or anything, instead goes well with the device. Removing the back panel reveals the battery, micro-SIM & micro SD card slots. While the micro SD is hot swappable, you will need to remove the battery to change the SIM.

The 5.7” Super AMOLED screen with a 2560 X 1440 resolution produces an insane 515ppi display with colours that are crisp and vivid, which is a treat to look at. Although some may find the colours are over saturated for their taste. Playing graphic intensive games, watching videos & viewing photos in this screen is an absolute treat.

Note 4 comes with Android 4.4 (Kitkat), with Touchwiz Nature UX 3, which is a heavily customized Interface for Android by Samsung. The interface responds smoothly, there was hardly any delay when navigating within the OS and the apps. The S-Pen throws in a lot more features like note taking, drawing a picture, selective image cropping, multi-selection etc. which can be potentially useful features on the move. At the same time, Touchwiz & S-Pen has a significant learning curve and takes time to get adjusted to use it completely to its extent. Samsung also has put the multi-window feature carried on from its predecessors of Note family, which enables you to open 2 apps at a time & resize the screen space occupied by the app too. While it’s a good feature to have, but practical usage of this feature is pretty limited.

Also, there is a mode exclusively for one handed usage which adds the 3 android buttons to the side of the screen which can be made visible by swiping from the side, and also tries to reduce the screen to enable one handed usage. But somehow, we found it removes the charm of the device. The fingerprint scanner is more accurate than it was on Galaxy Alpha, and responds in a better manner here.

The built in video player pretty much played anything we threw at it from .avi, .mp4 to .mkv files. Also, Note 4 supports 4K video playback, which is a total treat to watch due to 2K screen resolution that this device renders in. Also, if you don’t like the default video player in any case, you can always download VLC, MX player etc. from the Play Store which are available for free and support a wide range of file formats and resolutions.

Similar to the default video player, Samsung has also bundled a default music player which again supports a lot of formats and is pretty easy & straight forward to use. The sound quality is nothing short of great and also has equalizer for you to change according to your preferences. Also bundled is Google Music app which serves as a good alternative for the default music player. 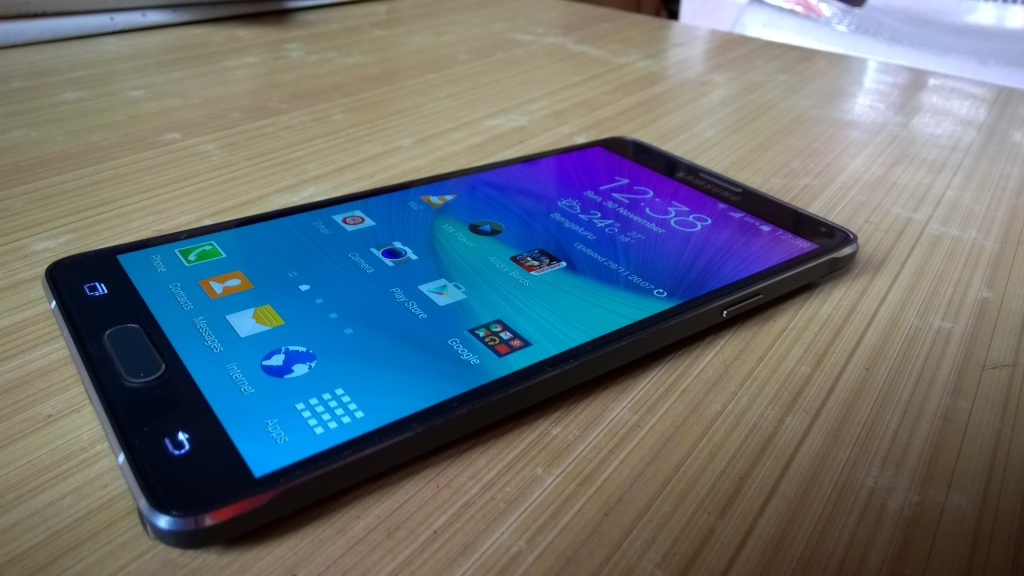 Note 4 supports EDGE, 3G or 4G data connection speeds. Wi-Fi (dual band) support is also there and so are NFC and Bluetooth for data transfer, it can also act as your personal Wi-Fi hotspot with the internet sharing feature, allowing you to tether other devices. Wi-Fi is also useful for sharing via DLNA.

Kitkat comes with Google Chrome which has full support for HTML5 and browsing is smooth and easy, with no issues. There are a few alternatives like UC browser, etc. on the Play Store if you don’t like it. GPS with GLONASS support is also thrown in for the location based services and apps.

Note 4 throws in couple of more sensors UV & Heart Rate Monitor. HRM is for the fitness conscious people which helps in keeping track of their health.

Note 4 comes with a 16 MP main camera with Optical Image Stabilization. It takes some really great shots in daylight. Also, the lowlight performance has been improved to a great extent and takes some really good shots in low light, indoors and night times. There is also a LED flash, which is quite good for snapping a picture in a medium sized room in total darkness. It is not very powerful flash though. It won’t illuminate objects satisfactorily at a distance of more than 15 feet. The OIS doesn’t perform up to the mark and you can see your shot getting blurs most of the times in case you shake the device while clicking the picture. Also, with low light at times with same colour backgrounds, the camera struggled a lot to focus the subject.

Video recording allows for capturing in 4K, 2K, 1080p & 720p resolutions. The level of detailing is great in 4K recordings, but since the OIS is on a software level, you lose OIS at 4K resolution since it makes full use of the sensor area. We would have preferred OIS to be at a hardware level though. Hence OIS for video is available for resolutions < 2K. 3 mics provided for directional audio recording do a great job at capturing the surrounding sounds properly. But the positioning of 2 mics in the bottom part, makes you to be bit careful not to block the mics by placing you hand in front of them inadvertently.

The 3.7 MP front secondary camera is very good at taking selfies in wide angles and great for skype/video calls, etc. and also allows for 1440p video recording. Here are some sample pictures clicked with Note 4.

Note 4 packs in a 3220 mAh battery, which lasts easily more than 2 days on moderate usage, which is great for a smartphone. With heavy usage it will easily sail through the day and overnight. There is also an ultra-power saver mode which automatically kicks in at 10% which turns the theme to greyscale and limits number of background apps to save the power, which will extend the battery life by few more hours. Also, Samsung has added fast charging which charges the device from 0 to 50% in just 30 minutes and 100% in 100 minutes. 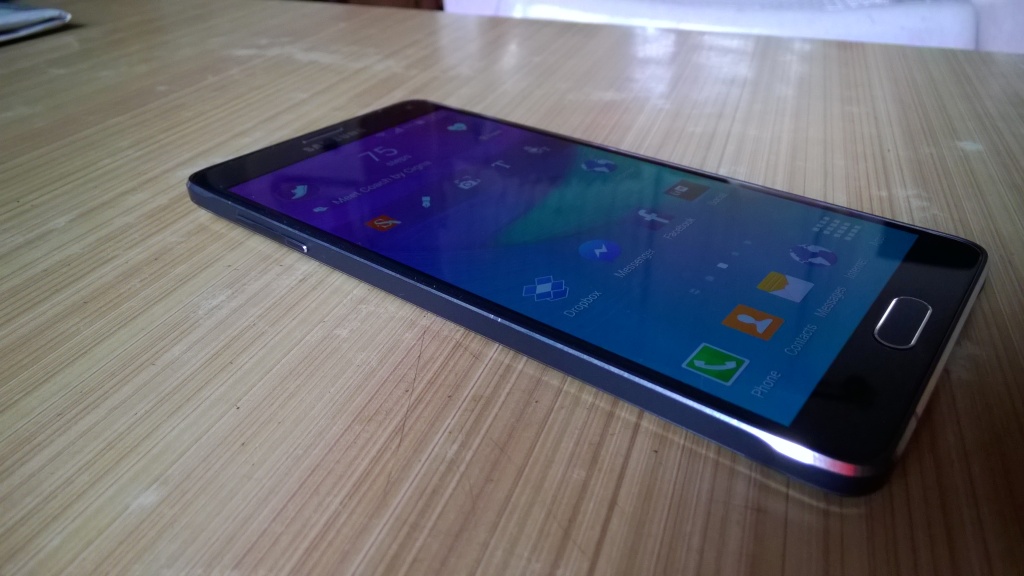 Note 4 has been launched for Rs. 58,300. You may be able to find it at a street price of Rs 55000/56000. For all its features, we still think it is bit overpriced. It still lacks water & dust resistance capabilities that are found in Galaxy S5. Also, the micro-USB port in not USB 3.0 as in Note 3 and Galaxy S5. The other options in this price range which is as powerful as Note 4 is the Nexus 6 by Motorola which costs around 44k for 32GB version & 49k for 64GB version. This is definitely not for people who are not comfortable using a stylus, or else you would end up not using this device to it’s full capacity. .

Turns out earphones do come with the phone, which due to some mix up wasn’t in the box/unit that we were provided with. So, now we got one here. The earphones are quite good. It also has a mic and volume +/- and another button which is used to play/pause media as well as receive phone calls.