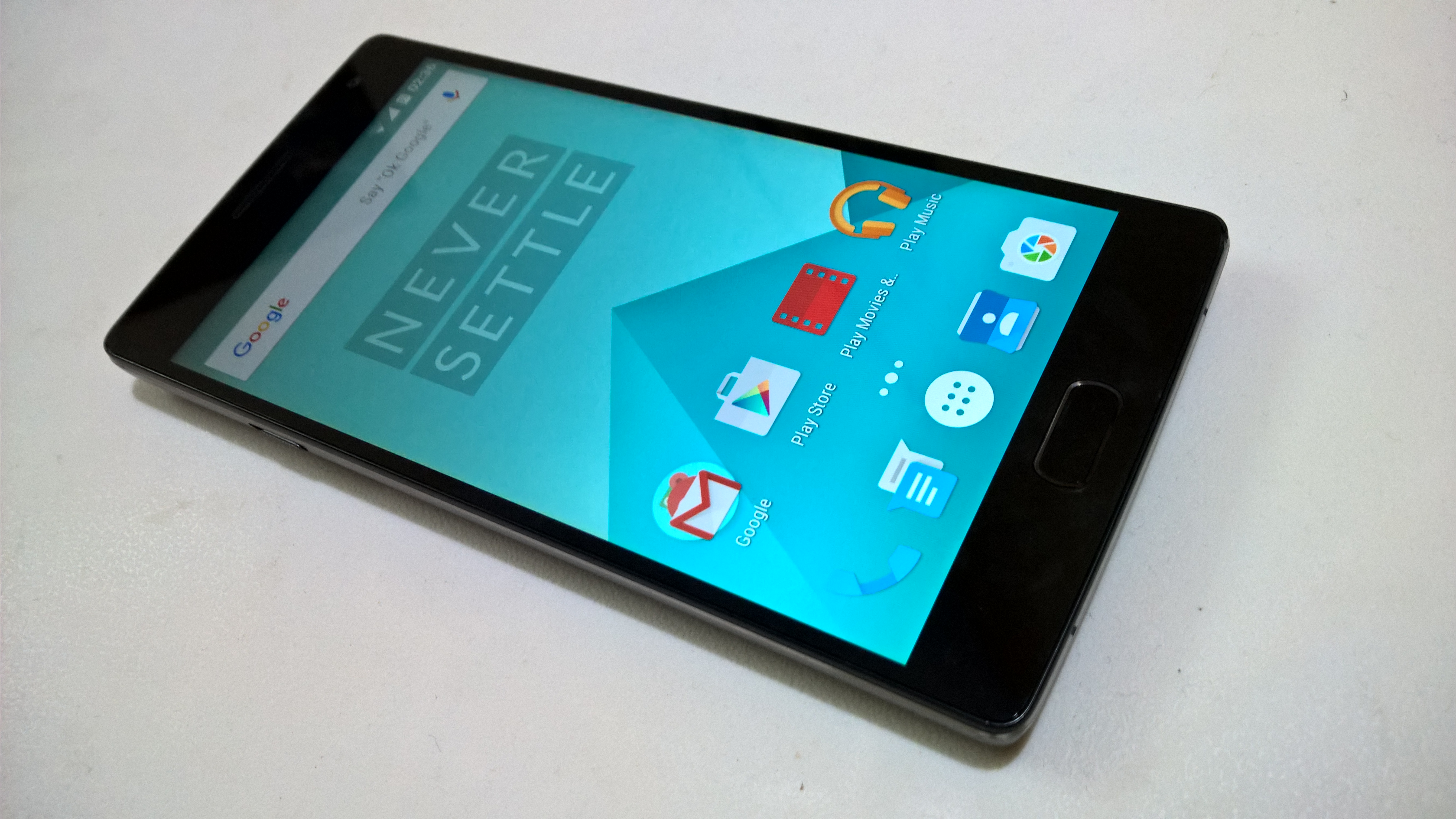 One plus Two is the new flagship from Oneplus, successor to One plus One which was released in 2014. One plus One was released with great specs rivaling that of the flagships for a budget price and was a big hit with the people. Also worked in its favour was the invite system which built the hype around it. Let us see how One plus Two fares this time around.

The hardware specifications are in-line with some of the flagships:

The phone looks good, similar to its older brother, One plus One. Design hasn’t changed much and you would easily mistake it for One plus One except for its fingerprint sensor. The dimensions are 151.8 x 74.9 x 9.9 mm. It is not thick or thin at 9.9mm and feels solid to hold. The frame, visible in the sides are made of metal (Aluminum & Magnesium), curvy at the edges. The back panel make it easy for the user to grip the phone due to the matte finish in the back. At 175 grams, it feels quite good to hold, considering the size of the screen and phone. The phone is tricky to operate in one hand since the screen size is more than 5 inches.

The buttons go on the right side with volume rocker on the top followed by the power/lock-screen button. In the left side of the device, you can find a 3-step slider button for different notification modes in the phone. 3.5 mm audio jack and a mic are on the top of the phone. There is a USB C-type slot for connecting and charging at the bottom portion in the middle and the speaker grills on either sides of it. Below the screen, you can find the fingerprint sensor in the middle, which also acts as a home button, followed by two capacitive buttons on left and right side of it.

The 5.5” IPS LCD screen with a Full HD resolution (1920 X 1080, we think the same one used in One plus One) produces a great 441 ppi display with colours that are crisp, which is a treat to look at. Outdoor visibility is so-so. It is pretty hard to look at the screen in direct sunlight in middle of the day. And this screen is protected by Corning Gorilla glass 4, which means it can take quite a lot of punch.

The Interface is a customized UI for android called Oxygen OS. It reminds us of Cyanogen Mod which was being used by One plus One. But it is not exactly same, there are some small changes like from home screen, if you swipe to the left, there is a place similar to a hub where your most used apps and contacts appear. Otherwise, the UI is very similar to the experience offered by vanilla Android, which is not a bad thing. Any android user would feel right at home and isn’t very confusing. Also it doesn’t come with any other apps pre-installed except the basic google ones.

The built in video player pretty much plays anything, from .avi, .mp4 to .mkv files. It also supports 4K video playback. All the videos played without any issues. Also, if you don’t like the default video player in any case, you can always download VLC, MX player etc. from the Play Store which are available for free and support a wide range of file formats and resolutions.

There is no default music player bundled, except the Google Music app which supports a lot of formats and is pretty easy & straight forward to use. The sound quality is good and also has equalizer for you to change according to your preferences.

Oneplus Two supports EDGE, 3G and 4G-LTE data connection speeds. Wi-Fi and Bluetooth are there, it can also act as your personal Wi-Fi hotspot with the internet sharing feature, allowing you to tether other devices. Wi-Fi is also useful for sharing via DLNA.

The fingerprint sensor works very well without any issues and pretty easy to set up. First, you need to scan the fingerprints in many directions and pretty much unlocks it quickly, without any hassles. Also, you can set-up some trusted devices like Bluetooth speakers and wearables, which when paired, phone wouldn’t be locked. The screen would directly unlock without asking for any password or fingerprints when the device is connected to the paired devices.

Oneplus Two comes with a 13 MP main camera. It takes really good shots in daylight. Lowlight performance is also good. There is also a dual LED flash, which is quite good for snapping a picture in a medium sized room in total darkness. It is quite powerful flash though. It illuminated objects satisfactorily at a distance of around 15 feet. Macro shots are particularly good. There are quite some settings in here, like manual focus, shutter control etc in a dedicated manual mode which gives you opportunity to explore the capabilities and experiment.

The 5 MP front secondary camera is good at taking selfies and great for skype/video calls, etc. and also allows for 720p video recording. Here are some sample pictures.

Oneplus Two packs in a 3300 mAh battery, which easily lasts for 2 days on moderate usage, which is really great for a smartphone. With heavy usage it will easily sail beyond a day. There is also an ultra-power saver mode which limits number of background apps to save the power, which will extend the battery life by few more hours. Battery life is very good.

Oneplus Two has been launched for Rs. 25000. It’s a great phone with great all round performance. The design is great with the metallic frame and all. Is it a great upgrade over Oneplus One? The CPU, camera, RAM has been upgraded, but the design is pretty much same and hard to distinguish from the Oneplus One except for the fingerprint sensor in the front side. It comes with 16 & 64GB versions (16GB version costs Rs. 23000 and RAM is downgraded to 3GB). We feel it is better to pick 64GB version since it has more space and RAM, since the phone lacks micro-SD expansion. Since the phone uses, USB C-type, not a lot of cables are available in the market yet. The only downside with this phone is the screen’s outdoor visibility. At times, it is really hard to figure out what’s visible when held under direct sunlight in the middle of the day. Otherwise this is a bang for the buck phone.