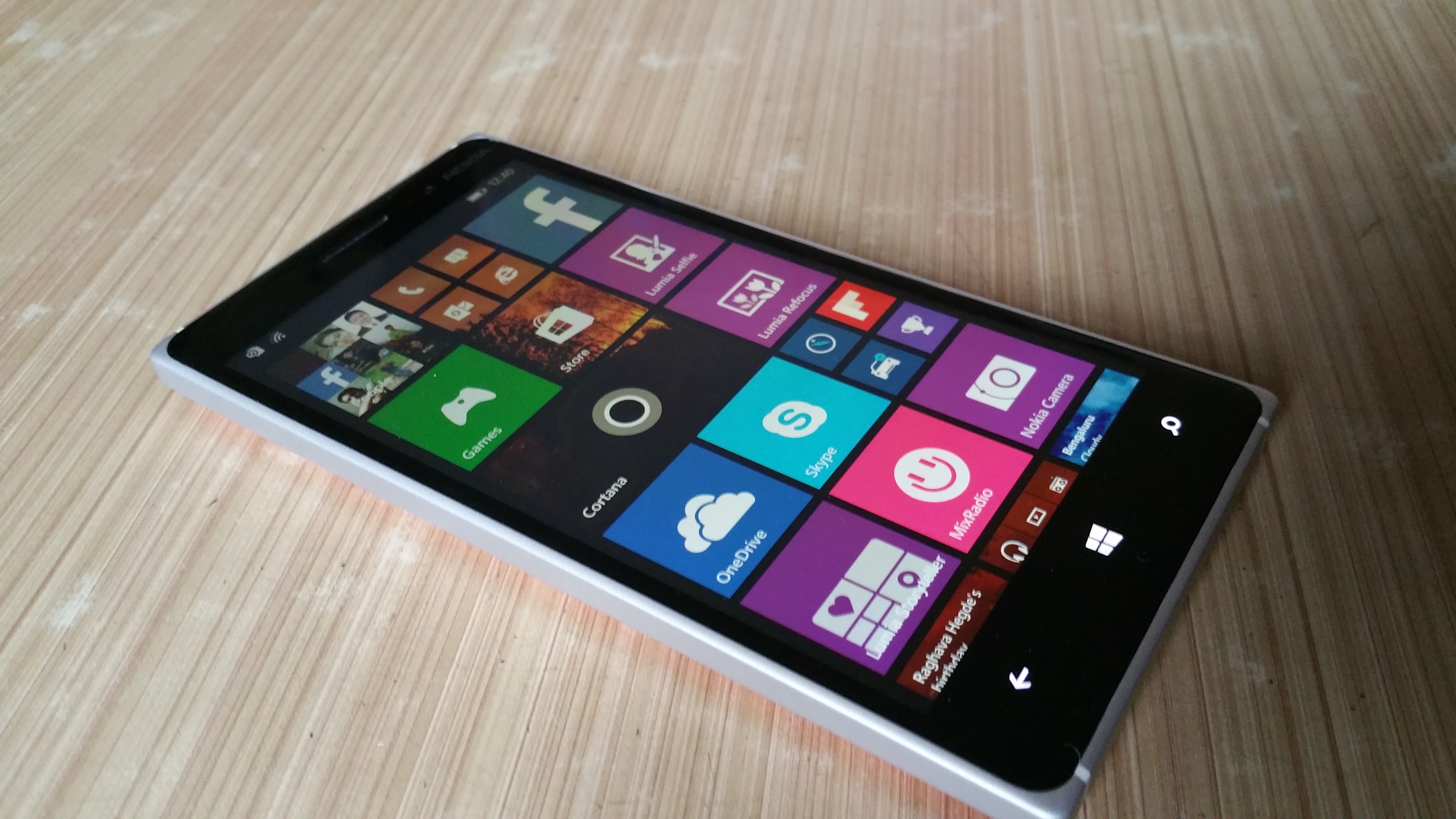 Being a mid-range phone, Lumia 830 has quite good, if not great hardware specifications:

The phone looks good, Nokia/Microsoft has taken the design from 930 and managed to add a removable back panel to it. So you can easily change the color of the phone if you wish to by simply changing the back panel to a different color. Also, it carries a curved Gorilla Glass 3 on top. The dimensions are 139.4 x 70.7 x 8.5 mm. It is relatively thin at 8.5mm and feels solid to hold in a hand. The sides made of aluminum, bit curvy at the edges and the back panel make it easy for the user to grip the phone and it feels like you are holding a premium metallic flagship. At 150 grams, it doesn’t feel heavy or bulky on the hand. The phone is quite easy to operate in one hand since the screen size is not more than 5 inches.

The buttons go on the right side with volume rocker on the top followed by the power/lock-screen button and the dedicated camera button further downwards near the end. A 3.5 mm audio jack and a micro-USB port are on the top of the phone. The nano-SIM slot and micro SD slot are accessible once you remove the back panel. The micro-SD card slot is hot swappable, while the nano-SIM slot requires you to remove the battery to insert/remove the SIM from it. We would have preferred it to be hot swappable without having to switch off the phone. Below the screen, you can find the 3 touch buttons for back, start and search which are standard for every windows phone.

The 5” IPS LCD screen with a 1280 X 720 resolution produces a good ~ 300 ppi display with colours that are crisp, which is a treat to look at. The polarizing ClearBlack technology makes the screen display deep blacks more effectively and outdoor visibility is best in its class. You can actually use the phone for even watching movies in direct sunlight. And this screen is protected by Corning Gorilla glass 3, which means it can take quite a lot of punch. It also packs a super sensitive touch mode, which allows user to use the phone even with the gloves on, which would be a handy feature at times.

Lumia 830 runs Windows Phone 8.1 with Qualcomm Snapdragon 400 1.2 GHz quad core processor with 1GB RAM. It shows while operating the phone because the UI is very fluid and buttery smooth. Windows Phone 8 UI in itself is very smooth. The animations and transitions play out without any stutter. The UI of WP8 is very user friendly, without any hassles and simple to use. Windows Phone 8 has a new home screen, wherein you can customize the home screen by resizing the tiles in 3 different sizes. With 8.1 update, you can also group the tiles together which expand on tapping them. Although the UI is very good and all, we are yet to see lot of choices for apps on Windows Phone Store, when compared with iOS and Android. There are some popular apps like Angry Birds, Facebook and Twitter etc. and the number is still growing and has a long way to go before it catches up with Android or iOS. Some popular apps like Candy crush are still missing, more on Windows Phone 8 on another day. You won’t be disappointed with the UI for sure.

The built in video player (Xbox Video) comes with quite a few codecs and hence plays most of the videos out of the box. Lumia 830 supports HD videos upto 1080p, which played without any hitch or glitch. The playback was very smooth. However it doesn’t support 4K videos. The other downside that we found was that the built in video player does not support .mkv files. Other than that, it managed to play all the files we threw at it: .avi, .mp4, .wmv, .m4v etc. There are some 3rd party apps in the store like CCPlayer which do play other formats. Also, the VLC Player is well on its way to Windows Phone 8.

The default app for music is Xbox Music. The music is arranged according to artist, albums, genre, playlists and all songs. Nokia has also given a 7-band equalizer, which, sadly is not accessible in the music player and can be accessed on the settings page, which makes it little inconvenient because you have to navigate every time there whenever you have to change those settings. Also, the equalizer settings work on the loudspeaker too, not just the earphones. The Music can be accessed using the default app or the MixRadio app, which also allows you to download songs from MixRadio Store, which has pretty good collection, and also allows you to stream songs, which can also be downloaded for offline listening, which is a nice feature given that we don’t have good internet connectivity while on the move.

It also has a FM Radio, which requires you to connect an earphone, which doubles up as an antenna for signal reception.

Glance Screen – It shows quick notifications, clock and some additional info on the screen even when the phone’s screen is locked and is sleeping. You can set it to show up only when you wave your hand in front of it or for some time interval etc., and also change the color of the notification texts.

Lumia 830 comes with 10 Megapixel Carl Zeiss lens with OIS (Optical Image Stabilization). The main camera, with f/2.2 BSI lens takes some very good photos in low light conditions, which can easily match. If not exceed some high end flagship phone cameras. Add OIS to this and what you get is a camera that puts many point & shoot cameras to shame. Microsoft packages a very good app called Lumia Camera which is the default camera app in Lumia phones. This app allows lot of control over how you can shoot the picture. It allows you to change most of the settings like exposure, shutter speed, ISO, white balance, etc. This is the best mobile camera app out there in any platform. It allows for manual focus. The UI for this app is very intuitive, with all the dials where you drag the along the arc to change the values. Very slick.

There is also a LED flash, which is OK for snapping a picture in a medium sized room in total darkness. It is not a powerful flash though. It won’t illuminate objects satisfactorily at a distance of more than 10 feet. The built-in picture editor offers some basic features like rotating, cropping and an auto-fix option. The Lumia creative studio is a better option at that. There are also Adobe Photoshop express and many more such apps available at the windows store which offer more options for post processing. The 0.9 MP front secondary camera is ok for taking selfies in wide angles and skype calls.

Video recording allows for capturing in 720p and 1080p resolutions on main camera, with 30fps. Video details are very good & crisp. You can switch on Surround sound recording for the video recording, which will record videos with Dobly Digital Plus 5.1. The audio recorded in the videos with these setting switched on is stellar, it captures audio from multiple directions and you can feel it when you play it back on using an earphone. The OIS works very effectively at cancelling out small shakes & nudges while shooting videos from the main camera. Front camera only allows 720p video capture. Here are some sample pics shot with Lumia 830.

Lumia 830 packs in a 2200 mAh battery, which lasts almost 1.5 days on moderate usage, which is good for a smartphone. With heavy usage it will just make it through the day. There is also a battery saver mode which automatically kicks in at 20% which turns off live tile animations and background apps to save the power, which will extend the battery life by few more hours.

Lumia 830 has been launched for Rs. 26,999. For this price this is one of the good phones you can buy. But we feel, to truly attain that “Affordable Flagship” tag, it should have been priced some 3-4k less than it is now. The hardware seems bit dated for the price though, but it makes up for that with best camera and a great design at this price. It’s a good all round phone with good multimedia performance. The issue with this is that being a Windows Phone, you won’t find apps as much as in Android or iOS. Otherwise, it’s a good buy at this price if you are particularly looking at a good design and camera. In a nutshell, this phone looks like a premium flagship, shoots pictures & videos like a flagship, and performs like similar to a mid-range phone, which isn’t such a bad thing at this price.