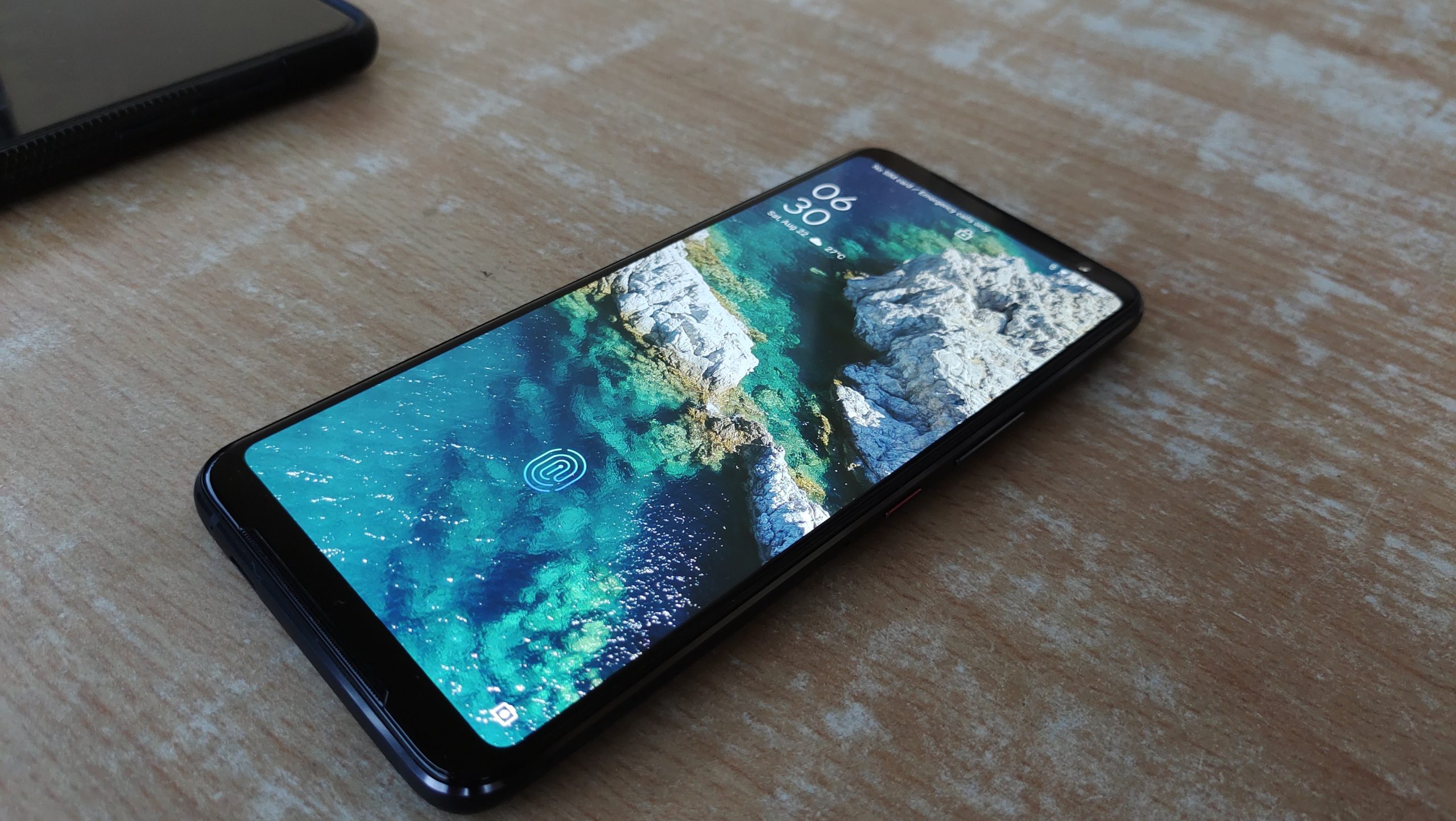 Asus had launched ROG Phone 2 (ROG stands for Republic of Gamers, famous for gaming laptops and accessories from Asus) last year with flagship hardware, focusing on gaming needs. This time Asus has refreshed the hardware with the latest flagship level.

Following is the hardware specification for Asus ROG 3:

The device looks modern and feels great to hold. The measurements stand at 171 X 78 X 9.9 (in mm). The phone is quite big and the entire screen would not be reachable in one hand for people who don’t have large hands. The aspect ratio is 19.5:9, which makes the phone long and is not apt for operating with one hand for people that don’t have large hands. Since it has AMOLED display, the visibility is excellent even in direct sunlight, with ample brightness.

The device is not very slim when compared to other flagships, and the camera on the backside of the device sits relatively on par with the back panel and does not protrude much. The back side has a ROG logo in the center which lights up and keeps changing the color when gaming mode is switched on. It seems like a small gimmick, but it does look cool. The front side design is not like the flagships of these days, full front side of the device is not used by the screen, instead it has more of a traditional design to it, with little space above and below the screen. This, we guess is to make room for the dual speakers present on both above and below the screen and for both we have small slit. The top portion also houses the front camera, proximity and ambient light sensors.

On the bottom side of the phone, we have a mic and the USB C-type connector to the left. On the left side of the phone, you have the SIM tray, where you can insert 2 SIM cards. Then you have a custom dual USB C-type ports in the middle. This is to enable people to charge the phones even when playing or, to connect further accessories to the device.  Power and the volume buttons are in the right side towards the top from midway. Above the volume buttons. The top side has a solitary mic which would be used while recording audio for the videos. The both ends of the right side have air-triggers which enhance the gameplaying experience.

It comes with Android 10, with ROG UI on top. Asus has developed this custom skin specifically for ROG phones. There is not much changes from stock, except for say dark theme style. There are no irritating bloatware’s either. You still get some bundled apps like sound recorder and FM Radio, which is not much as to irritate. You can’t uninstall them, nor can you disable them. Overall, this is a great, clean Android experience. The In-screen fingerprint sensor is fast and unlocks the phone quickly.

There is a specific gaming mode, where the device detects games and automatically disables the alerts, frees up memory etc, to have an interruption free gaming session. You can also cast it live or record the screen. This is a nice feature for gamers to have.

Watching videos in this phone is a great experience, owing to the wide aspect ratio of the phone. The display is crisp and makes it for a great watch. It is capable of playing 4K videos without any hassles due to the processor used. Audio quality is stellar and you would enjoy listening to your music. There are some audio settings which you can tweak around in the settings once you have connected your earphones and even for the phone speakers. The two speakers sound amazing and easily trump many laptop speakers for that matter. You can easily watch a movie on the phone with these speakers. We were really surprised by the amount of bass generated by the speakers.

The device does not come with a headphone jack. But there is an adapter for that, and the good thing about having multiple USB-C ports on the device is that you can easily listen to music with a wired headphone even when charging the device. There is no hard and fast rule about which port should be used for what. So, the usual problems of not having a headphone jack is not found here.

ROG 3 supports the usual EDGE, 3G or 4G (with VoLTE) and 5G too (Good luck testing 5G in India right now). Wi-Fi (dual band) support is also there, and so is Bluetooth 5.0 for data transfer, it can also act as your personal Wi-Fi hotspot with the internet sharing feature, allowing you to tether other devices. Wi-Fi is also useful for sharing via DLNA. It also comes with dual VoLTE support. Bluetooth protocols like LE, A2DP. For location services, the device supports GPS, GLONASS, etc. Also, for data transfers, the device has 2 USB C-type connectors. NFC is also there. You cannot charge the phone by connecting both ports. The side port will take the preference over the port found at the bottom.

ROG 3 comes with a 64 MP main camera and a 13 MP secondary wide-angle lens and a 5 MP macro lens. There are few modes like Portrait, Auto, Night and HDR which is self-explanatory. There is also a Pro mode where in you can control all the settings manually, like shutter speed, ISO, white balance, exposure and also gives an option to manually control the focus of the main camera. The camera does have EIS (Electronic Image Stabilization) and stabilizes a bit. The camera takes great photos in daylight and decent photos in low light. The portrait mode works well and you get good looking photos here. It also allows you to shoot and store the photos in RAW format which allows more control for post-processing later. The 24MP front camera takes some decent photos, although nothing great to mention about, you can live with it. Overall, it takes great photos and is up there in terms of “flagship” camera performance. We were surprised by the camera performance since this is a gamer focused device. ROG 2’s camera was not that great when it came to night/low light scenarios, but this time around Asus has addressed this and it takes really good pictures at night. Here are some samples from the camera.

Video recording allows for capturing in 8K, 4K, 1080p & 720p resolutions, with EIS (not available with 8K) and stabilization is really good. The device has a total of 4 mics for recording, which shows in its video recording abilities and do a stellar job at capturing the surrounding and far-off sounds properly. It also allows slow motion video capture, 1080P at 240 FPS and 720P at 480 FPS.

ROG 3 has a 6000 mAh capacity battery, which lasts easily more than 2 days on moderate usage, which is really great for a smartphone in its class. With heavy usage it will still make it through a day and half. We once did a continuous gaming session for around 3 hours straight and by the end of it, the device had spent roughly 30% of the battery. It packs a punch in terms of battery performance. There is a power saving mode which will limit the background app activities, disables email auto-sync and reduces visual effects. Also, there is a 30W fast charger provided with the phone which charges the phone faster.

Asus ROG 3 has been launched at ₹ 49,999 (8 GB RAM, 128 GB Storage). It is also available in 12GB/256GB for ₹ 57,999. Oddly enough, the 16GB/512GB version has not been released in India and it is really a shame since the power users would have really loved it. We think that Asus missed an opportunity here. Anyways, we had the 8GB/128GB variant as our review device. The 12GB and 16GB variant gets few accessories for free with it. At this price, it gives great value in terms of design, performance. This phone has been designed specifically for gamers and it shows, attention to detail like a side charging port to give an undisturbed gaming experience while charging, the haptic feedbacks (AirTriggers as Asus likes to call them). It goes up against the likes of Oneplus 8/8 Pro, etc. ROG 3 is not without its shortfalls, lack of storage expansion and headphone jack. ROG 3 offers a great value proposition for its price. With great performance and big battery, combined with a flagship processor, Asus has great gaming device with flagship performance. It is hard to argue against it at this price. Its easily the best gaming phone out there at the moment, when you consider all the accessories that you get for this device. No other device gives so much value for money at this price point and you can hardly go wrong with this, whether you are a gamer or not.